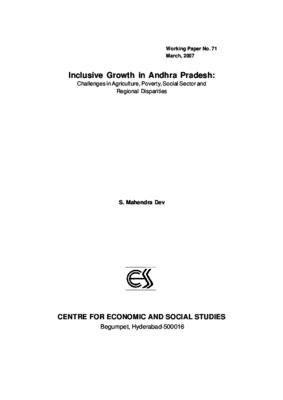 This paper deals with inclusive growth in Andhra Pradesh. Growth may be higher in the last two decades but inclusive growth or equitable development has been missing. It is like running a train with engine only without connecting bogies and people to the engine. According to us, important elements of inclusive growth are : agricultural growth, employment generation and poverty reduction, social sector (health and education) and reduction in regional and other disparities. In this paper, we concentrate on these four elements of inclusive growth. There seems to be some 'turn around' in the gross state domestic product (GSDP) of A.P. in the last five years. The average annual growth rate was 6.9% during 2002-07 and 7.8% during 2003-07. However, there are problems in the four elements of inclusive growth. Growth of agriculture particularly crop sector is very low. Employment growth in the postreform period (1993-94 to 2004-05) is the lowest in the country. The recent data shows that literacy levels are also low as compared to many other states. The National Family Health survey (NFHS III) indicate that A.P.'s rank for infant mortality is 11 out of 17 states in the year 2005-06. Growth rates in district domestic product (DDP) and per capita DDP shows that 7 districts of Telangana (Ranga Reddy, Nizamabad, Khammam, Hyderabad, Mahbubnagar, Warangal and Medak) and 2 districts of North Coastal (Visakhapatnam and Srikakulam) recorded higher growth rates than that of state average. On the other hand, all the districts in South Coastal and Rayalaseema and three districts of Telangana and one district of North Coastal showed lower growth than that of state average. However, one has to see the quality of growth in Telangana and Rayalaseema districts. We have examined whether A.P. can achieve Millennium Development Goals (MDGs). It is depressing to note that Andhra Pradesh will not meet MDGs in 10 out of 14 indicators. Thus, except in poverty, enrolment of boys and girls and drinking water, A.P. may not achieve millennium development goals in crucial indicators of education, health and sanitation at current rates of progress. The progress in MDGs for some regions and socially deprived sections like SCs and STs has been slower than the state average. This paper suggests several policies for improving inclusive growth in A.P. Economic growth may be improving but A.P. is lagging behind in agriculture, employment , human development and in reducing regional disparities. There is a need to operationalize a plan for achieving inclusive growth during the 11th Five Year Plan period and beyond in Andhra Pradesh. The action plan should cover the priority areas like agriculture, employment and social sectors. It should have a plan for removing economic and social deprivation across all regions. Also it should have a plan for socially disadvantaged sections.Gowth, Andhra Pradesh, agriculture, poverty, Social Sector, Regional Disparities