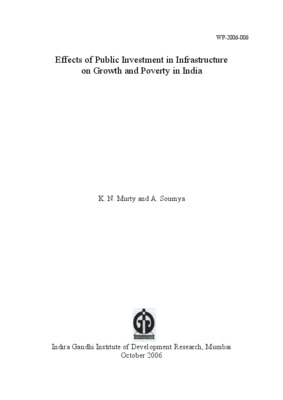 Counter factual policy simulations of sustained increase in public investment in infrastructure, financed through borrowing from commercial banks, shows substantial increase in private investment and thereby output in this sector. Further, due to increase in absorption, real private investment and thereby output in all the other three sectors also seems to increase, which sets-in motion several other macro economic changes. A 20% sustained increase in public investment in infrastructure, which is 0.5% of GDP and 2.7% of total govt. revenue in 2000-03, can accelerate the real macro economic growth by 1.8% in the medium to long-run (6-10 years after the policy change). This will be accompanied by a 1.4% fall in wholesale price index and 0.2% decline in the rate of inflation. Sectoral prices, except that of agriculture, also decline to varying extent, the steepest decline being for infrastructure price. Further, this increase in income will lead to 0.7% reduction in poverty in rural India. This shows the potential for achieving the much-debated 10% aggregate real GDP growth in the Indian economy.Public Inversment, Infrastructure, Growth, poverty, India