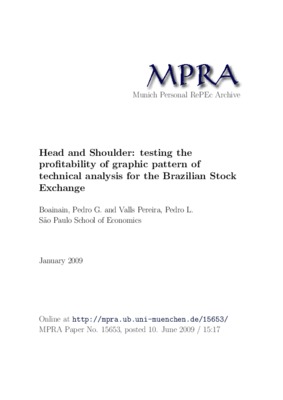 Head and Shoulder: testing the profitability of graphic pattern of technical analysis for the Brazilian Stock Exchange

Starting from an adapted version of Osler and Chang (1995) methodology, this article empirically evaluates the profitability of investment strategies based on identification of the Head and Shoulders chart pattern in the Brazilian stock market. For that purpose, several investment strategies conditioned by the identification of the Head and Shoulders pattern (in its basic and inverted forms) by a computer algorithm in daily price series of 30 stocks from January 1994 to January 2009 were defined. Confidence intervals consistent with the null hypothesis that no strategies with positive returns can be based only on historical data were constructed using the Bootstrap sample inference technique in order to test the predictive power of each strategy. More specifically, the mean returns obtained by each strategy when applied to the stock’s price series were compared to those obtained by the same strategies when applied to 1.000 artificial price series - for each stock - generated in a parametric manner, by an E-GARCH, and in a nonparametric one. Overall, our results show that it is possible to create strategies conditioned by the occurrence of Head and Shoulders, with positive returns, which indicates that these patterns can capture from stock historical prices some signals about their future price trend that makes possible to create profitable strategies. Nevertheless, the same conclusions are not valid for the pattern in its inverted form and when the effects of taxes and transaction costs are considered, depending on their magnitude, neither in its basic form.Charting, Technical Analysis, Bootstrap, E-GARCH, investment strategy, Head and Shoulders, Osler and Chang