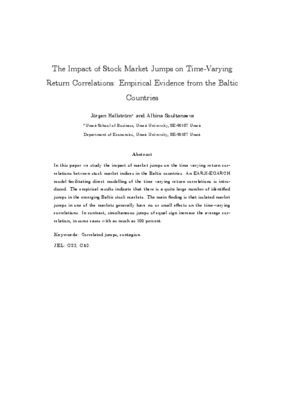 The Impact of Stock Market Jumps on Time-Varying Return Correlations: Empirical Evidence from the Baltic Countries

By Jörgen Hellström and Albina Soultanaeva
Get PDF (171 KB)

In this paper we study the impact of market jumps on the time varying return correlations between stock market indices in the Baltic countries. An EARJI-EGARCH model facilitating direct modelling of the time varying return correlations is introduced. The empirical results indicate that there is a quite large number of identi…ed jumps in the emerging Baltic stock markets. The main …nding is that isolated market jumps in one of the markets generally have no or small e¤ects on the time-varying correlations. In contrast, simultaneous jumps of equal sign increase the average correlation, in some cases with as much as 100 percent.Correlated jumps; contagion