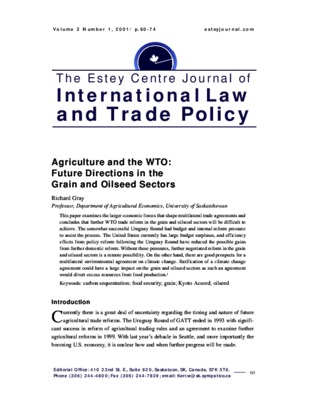 Agriculture and the WTO: Future Directions in the Grain and Oilseed Sectors

This paper examines the larger economic forces that shape multilateral trade agreements and concludes that further WTO trade reform in the grain and oilseed sectors will be difficult to achieve. The somewhat successful Uruguay Round had budget and internal reform pressure to assist the process. The United States currently has large budget surpluses, and efficiency effects from policy reform following the Uruguay Round have reduced the possible gains from further domestic reform. Without these pressures, further negotiated reform in the grain and oilseed sectors is a remote possibility. On the other hand, there are good prospects for a multilateral environmental agreement on climate change. Ratification of a climate change agreement could have a large impact on the grain and oilseed sectors as such an agreement would divert excess resources from food production.carbon sequestration, food security, grain, Kyoto Accord, oilseed, International Relations/Trade,