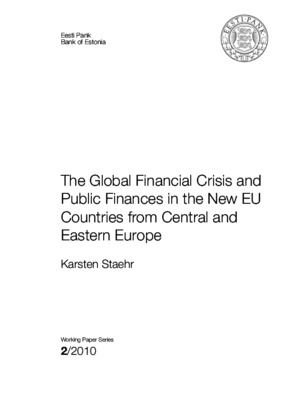 This paper discusses the public finances of the 10 new EU Countries from Central and Eastern Europe, with particular emphasis on the effects of the global financial crisis that started in 2008. The budget outcomes have differed markedly across the new EU countries, both before and during the crisis. The direct impact of the crisis on public finances was limited, but the severe downturns have strained public finances and increased debt ratios considerably. Estimations of budget reaction functions reveal that the budget balance has, in general, been moderately counter-cyclical, but also that the counter-cyclicality derives entirely from the revenue side. The medium-term fiscal outlook rests, to a large extent, on growth prospects. The uncertainties regarding future economicglobal financial crisis, fiscal policy, budget reaction functions, Central and Eastern Europe