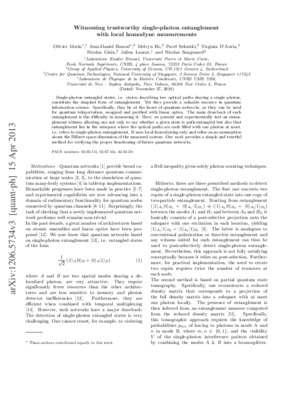 Single-photon entangled states, i.e. states describing two optical paths sharing a single photon, constitute the simplest form of entanglement. Yet they provide a valuable resource in quantum information science. Specifically, they lie at the heart of quantum networks, as they can be used for quantum teleportation, swapped and purified with linear optics. The main drawback of such entanglement is the difficulty in measuring it. Here, we present and experimentally test an entanglement witness allowing one not only to say whether a given state is path-entangled but also that entanglement lies in the subspace where the optical paths are each filled with one photon at most, i.e. refers to single-photon entanglement. It uses local homodyning only and relies on no assumption about the Hilbert space dimension of the measured system. Our work provides a simple and trustful method for verifying the proper functioning of future quantum networks.Comment: published versio