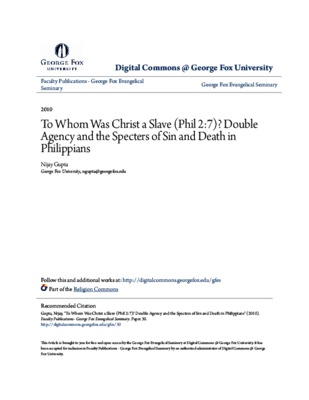 To Whom Was Christ a Slave (Phil 2:7)? Double Agency and the Specters of Sin and Death in Philippians

Paul’s so-called “Christ-hymn” in Philippians 2:6-11 is one of the most scrutinized passages in the Pauline corpus as questions abound regarding its origins, purpose, format, and the theological components of its Christology. One factor in the determination of this Christology is the interpretation of doulos in 2:7 focusing on the question to whom was Christ a slave? While a number of answers have been put forward, it will be argued that the best explanation involves “double agency.” That is, when the hymn is closely examined, as well as the theological character of the whole letter, Christ appears to be a subject and agent of the powers Sin and Death, but Paul knows and communicates the reality that he is really God’s agent who subverts and enervates these hegemonic powers. This not only illuminates Paul’s Christology, but can be identified as a model for other believers discussed in Philippians, including himself