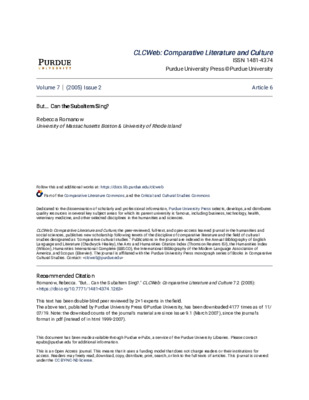 But... Can the Subaltern Sing?

In her paper, But... Can the Subaltern Sing?, Rebecca Romanow discusses the dominance of the English language in rock music and the cultural values and global power that are exerted through the exportation of rock by American and British bands. Further, she explores the question of the ways in which this music represents an area of popular culture where the voices of the non-English speaking and the non-Western are silenced. Salman Rushdie, in The Ground Beneath Her Feet, complains that rock music is precisely one of those viruses with which the almighty West has infected the East, one of the great weapons of cultural imperialism. The business of rock music production insures that rock remains a global conduit of Western culture, and, emphasizing Edward Said\u27s exhortation to think of the affiliation ... between music and nation, Romanow argues that the social and cultural power of rock creates a silencing of the non-Western voice. Reading the global proliferation of Western rock through Deleuzian and postcolonial thought, as well as exploring the notion of world music, Romanow shows the ways in which imperialistic and neo-colonialist hegemonies are embodied within this silencing, creating not a model for hybridity, but rather a deployment of Bhabha\u27s notion of the colonial mimic man