The making of Mau Mau: The power of the oath

From the unique perspective of the oath, this study investigates the entanglements of change in Kenya during the Mau Mau period, 1952-1960. Specifically, it challenges the prevailing Mau Mau narrative, revealing the oath as a complex, adaptive, and rational process ordered around symbols, gestures, and statements with long standing meaning and power. All Mau Mau initiates were required to take a secret oath of unity in order to join the struggle. Breaking the oath invoked an unstoppable curse on oathers and their families. As a result, the oath became a powerful mechanism in the formation of Mau Mau and served as a precursor to Kenyan Independence in 1963. Contrary to the long standing discourse of savagery, the Mau Mau oath was actually an elaborate, dynamic, and sophisticated ceremony based on ancient oathing traditions, symbolism, and beliefs. It was reconstituted from its former state to one that was much more offensive, secretive, dangerous, and inclusive of other groups such as women who were previously excluded. The oath was a product of the economic, political, cultural, and social unrest of the time. In addition to tracing historical developments and modeling the oath experience, this study explores the radicalization of the oath during the Mau Mau period forming new relationships to gender, crime, and purification that did not exist prior to the 1950s. This study centers the oath as the object for historical analysis through the investigation and documentation of African rituals, beliefs, and memories. The past is reconstructed from oral tradition, personal narratives, ceremonial reenactments, survey data, archived documents, ethnography, and myths. The sources reveal that Mau Mau oathers had their own imaginations, dreams, and objectives associated with the restoration of their stolen land and freedom. These varied perspectives demonstrate colonial contradictions juxtaposed with African oral accounts and memory. This study offers a fresh way to look at the contested Mau Mau past through the lens of the often misunderstood and misinterpreted oath. It intervenes with a new African Mau Mau story of reinvention, renewal, and power 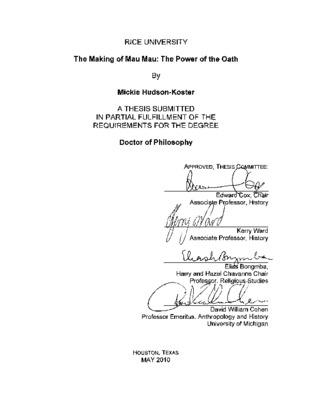