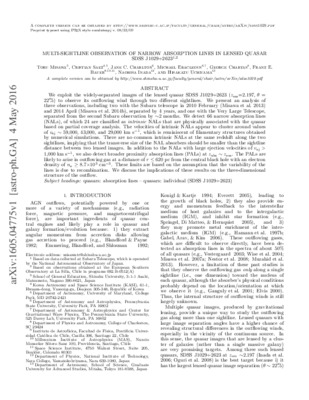 We exploit the widely-separated images of the lensed quasar SDSS J1029+2623 ($z_{em}$=2.197, $\theta =22^{\prime\prime}\!\!.5$) to observe its outflowing wind through two different sightlines. We present an analysis of three observations, including two with the Subaru telescope in 2010 February (Misawa et al. 2013) and 2014 April (Misawa et al. 2014), separated by 4 years, and one with the Very Large Telescope, separated from the second Subaru observation by $\sim$2 months. We detect 66 narrow absorption lines (NALs), of which 24 are classified as intrinsic NALs that are physically associated with the quasar based on partial coverage analysis. The velocities of intrinsic NALs appear to cluster around values of $v_{ej}$ $\sim$ 59,000, 43,000, and 29,000 km/s, which is reminiscent of filamentary structures obtained by numerical simulations. There are no common intrinsic NALs at the same redshift along the two sightlines, implying that the transverse size of the NAL absorbers should be smaller than the sightline distance between two lensed images. In addition to the NALs with large ejection velocities of $v_{ej}$ > 1,000 km/s, we also detect broader proximity absorption lines (PALs) at $z_{abs}$ $\sim$ $z_{em}$. The PALs are likely to arise in outflowing gas at a distance of r $\leq$ 620 pc from the central black hole with an electron density of $n_e$ $\geq$ 8.7$\times$10$^{3}$ cm$^{-3}$. These limits are based on the assumption that the variability of the lines is due to recombination. We discuss the implications of these results on the three-dimensional structure of the outflow.Comment: 23 pages, including 13 figures; accepted for publication in the Astrophysical Journal. A complete version with all tables and figures is available at http://www.shinshu-u.ac.jp/faculty/general/chair/astro/arXiv/sdss1029.pd