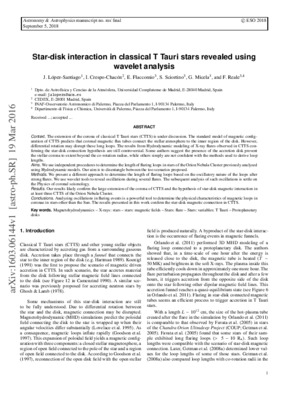 The extension of the corona of classical T Tauri stars (CTTS) is under discussion. The standard model of magnetic configuration of CTTS predicts that coronal magnetic flux tubes connect the stellar atmosphere to the inner region of the disk. However, differential rotation may disrupt these long loops. The results from Hydrodynamic modeling of X-ray flares observed in CTTS confirming the star-disk connection hypothesis are still controversial. Some authors suggest the presence of the accretion disk prevent the stellar corona to extent beyond the co-rotation radius, while others simply are not confident with the methods used to derive loop lengths. We use independent procedures to determine the length of flaring loops in stars of the Orion Nebula Cluster previously analyzed using Hydrodynamic models. Our aim is to disentangle between the two scenarios proposed. We present a different approach to determine the length of flaring loops based on the oscillatory nature of the loops after strong flares. We use wavelet tools to reveal oscillations during several flares. The subsequent analysis of such oscillations is settle on the Physics of coronal seismology. Our results likely confirm the large extension of the corona of CTTS and the hypothesis of star-disk magnetic interaction in at least three CTTS of the Orion Nebula Cluster. Analyzing oscillations in flaring events is a powerful tool to determine the physical characteristics of magnetic loops in coronae in stars other than the Sun. The results presented in this work confirm the star-disk magnetic connection in CTTS.Comment: Accepted for publication in A&