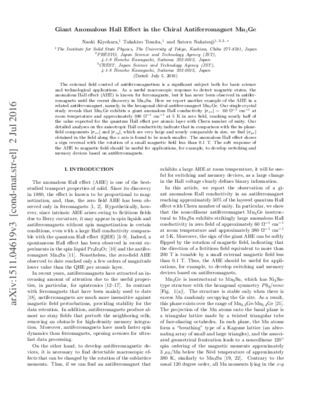 The external field control of antiferromagnetism is a significant subject both for basic science and technological applications. As a useful macroscopic response to detect magnetic states, the anomalous Hall effect (AHE) is known for ferromagnets, but it has never been observed in antiferromagnets until the recent discovery in Mn3Sn. Here we report another example of the AHE in a related antiferromagnet, namely, in the hexagonal chiral antiferromagnet Mn3Ge. Our single-crystal study reveals that Mn3Ge exhibits a giant anomalous Hall conductivity $|\sigma_{xz}|$ ~ 60 per ohm per cm at room temperature and approximately 380 per ohm per cm at 5 K in zero field, reaching nearly half of the value expected for the quantum Hall effect per atomic layer with Chern number of unity. Our detailed analyses on the anisotropic Hall conductivity indicate that in comparison with the in-plane-field components $|\sigma_{xz}|$ and $|\sigma_{zy}|$, which are very large and nearly comparable in size, we find $|\sigma_{yx}|$ obtained in the field along the c axis is found to be much smaller. The anomalous Hall effect shows a sign reversal with the rotation of a small magnetic field less than 0.1 T. The soft response of the AHE to magnetic field should be useful for applications, for example, to develop switching and memory devices based on antiferromagnets