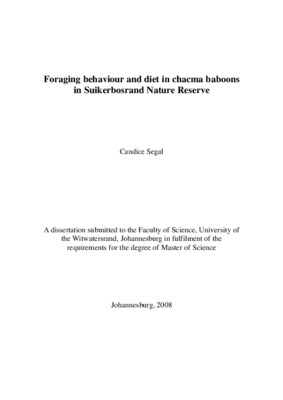 Foraging behaviour describes the mechanisms and decisions animals use to maximise energy gain. Baboons are a successful and widespread primate species in Africa, largely because of their ability to modify their broad omnivorous diet and foraging behaviour under changing environmental and climatic conditions. The population size of baboons found in the Suikerbosrand Nature Reserve, South Africa, has risen at a constant rate over the past few years, resulting in growing concerns of insufficient resources in the reserve to sustain the population. The aim of my study was to investigate foraging behaviour and diet in relation to the spatio-temporal fluctuations of resources in this isolated population of baboons. For my study, one individual in each of 10 different troops was fitted with a cell phone collar so that troops could be located daily using GPS data. Diet, which was assessed by faecal analysis, showed a wide variety of components in the dry season (e.g. fruit and seed 48%, plant matter 29%, invertebrates 5%, maize 8%). In contrast, diet in early and late rain seasons was restricted to fewer components: plant matter (61%) in early rain and fruit and seeds (55%) in late rain season. Contrary to my predictions, foraging behaviour, assessed through direct observation indicated that baboons foraged conservatively in the dry season when food resources are lower, spending more effort manipulating food and consuming comparatively less food. In the early and late rain seasons when food resources were greater, baboons spent more effort actively searching, manipulating and consuming food. Similarly, GPS data revealed that baboons travelled further in the early and late rain seasons than in the dry season. Baboons in the Suikerbosrand Nature Reserve appear to increase foraging effort by travelling more and selecting habitats where food resources are both abundant and energy rich. When resource availability was low, baboons tended to reduce energy expenditure by travelling less, selecting habitats with more reliable resource availability and consuming whatever foods were available. Home range size remained constant, showing no seasonal or spatial pattern but seasonal habitat use in troops varied, depending on habitat type. For example, in the dry season, troops preferred woodland and shrubland habitat over grassland but in the early rain season, habitat use in grasslands increased. This is most likely due to the increase in plant growth in grasslands. In conclusion, my study set out to investigate various aspects of foraging behaviour in a widespread and well researched primate species. My findings not only confirm our knowledge of the adaptability of baboon foraging behaviour and diet but provide new insight into foraging strategies in a seasonal environment as well as the underlying mechanisms influencing behavioural responses in baboons. The influence of changing spatial factors (e.g. habitat availability and resource quality) is less clear at a population scale and further studies are needed to better understanding of the influence of spatial changes in resources on foraging behaviour and troop dynamics. From my findings, I provide management advice, which can be used as an aid to manage the baboon population