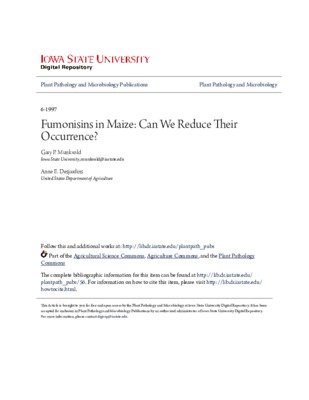 Fumonisins in Maize: Can We Reduce Their Occurrence?

In 1988, W. C. A. Gelderblom et al. reported that the fumonisins (Fig. 1), a new class of mycotoxins, had been identified from cultures of Fusarium moniliforme J. Sheld., and that these toxins had cancerpromoting activity (10). This report represented a major breakthrough in nearly a century of investigation into the animal and human diseases associated with consumption of maize contaminated with F. moniliforme. This also was the starting point for worldwide efforts to describe the structure, properties, and toxicology of this new group of toxins. Additionally, the report renewed interest in the phytopathology of the most notorious pathogen of maize