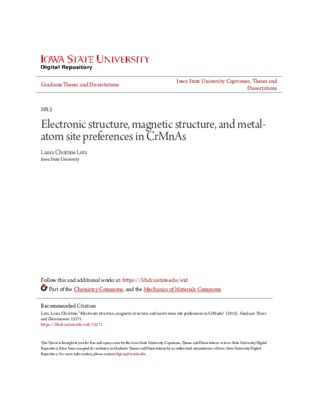 Density functional theory was used to examine stoichiometric CrMnAs, one of a class of 3d-metal arsenides that exhibit cooperative magnetic ordering. CrMnAs is a tetragonal structure with two inequivalent metal sites: M(I), which is tetrahedral coordinate, and M(II), which is square pyramidal coordinate. CrMnAs thus presents a “coloring problem,” the question of how the two types of metal atoms are distributed between the two types of metal sites. Previous diffraction studies have determined that CrMnAs is antiferromagnetic with the M(I) site primarily occupied by Cr. TB-LMTO-ASA local density approximation (LDA) calculations showed indications of instability in the nonmagnetic structure, which could be resolved either by structural distortion or by spin polarization. LDA crystal orbital Hamilton population (COHP) curves were used to predict the nature of particular direct-exchange interactions upon spin polarization. Spin-polarized total energy calculations were performed using VASP with the generalized gradient approximation (GGA). The lowest-energy structure had Mn at the M(I) site and a different antiferromagnetic ordering than previously observed. The structure with the second-lowest calculated total energy also had Mn at M(I). Next lowest were four structures with Cr at M(I), including the experimentally observed structure. Those four had calculated total energies ranging from 154.2 to 167.8 meV/f.u. higher than the lowest-energy case. The number of possible structures with small energy differences suggests that the observed magnetic ordering and coloring may be due to entropy rather than reflecting a true electronic ground state