A Three-Stemmed mRNA Pseudoknot in the SARS Coronavirus Frameshift Signal

A wide range of RNA viruses use programmed −1 ribosomal frameshifting for the production of viral fusion proteins. Inspection of the overlap regions between ORF1a and ORF1b of the SARS-CoV genome revealed that, similar to all coronaviruses, a programmed −1 ribosomal frameshift could be used by the virus to produce a fusion protein. Computational analyses of the frameshift signal predicted the presence of an mRNA pseudoknot containing three double-stranded RNA stem structures rather than two. Phylogenetic analyses showed the conservation of potential three-stemmed pseudoknots in the frameshift signals of all other coronaviruses in the GenBank database. Though the presence of the three-stemmed structure is supported by nuclease mapping and two-dimensional nuclear magnetic resonance studies, our findings suggest that interactions between the stem structures may result in local distortions in the A-form RNA. These distortions are particularly evident in the vicinity of predicted A-bulges in stems 2 and 3. In vitro and in vivo frameshifting assays showed that the SARS-CoV frameshift signal is functionally similar to other viral frameshift signals: it promotes efficient frameshifting in all of the standard assay systems, and it is sensitive to a drug and a genetic mutation that are known to affect frameshifting efficiency of a yeast virus. Mutagenesis studies reveal that both the specific sequences and structures of stems 2 and 3 are important for efficient frameshifting. We have identified a new RNA structural motif that is capable of promoting efficient programmed ribosomal frameshifting. The high degree of conservation of three-stemmed mRNA pseudoknot structures among the coronaviruses suggests that this presents a novel target for antiviral therapeutics 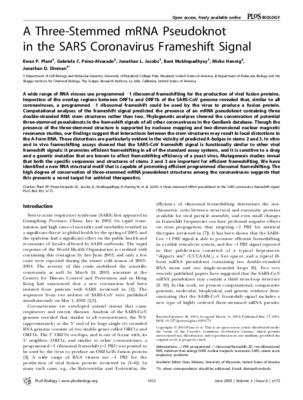