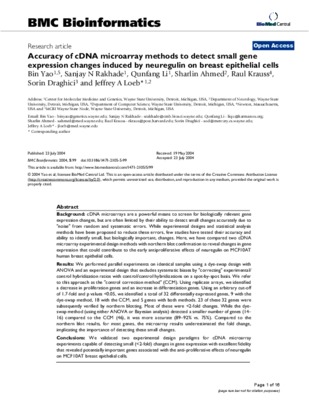 BACKGROUND: cDNA microarrays are a powerful means to screen for biologically relevant gene expression changes, but are often limited by their ability to detect small changes accurately due to "noise" from random and systematic errors. While experimental designs and statistical analysis methods have been proposed to reduce these errors, few studies have tested their accuracy and ability to identify small, but biologically important, changes. Here, we have compared two cDNA microarray experimental design methods with northern blot confirmation to reveal changes in gene expression that could contribute to the early antiproliferative effects of neuregulin on MCF10AT human breast epithelial cells. RESULTS: We performed parallel experiments on identical samples using a dye-swap design with ANOVA and an experimental design that excludes systematic biases by "correcting" experimental/control hybridization ratios with control/control hybridizations on a spot-by-spot basis. We refer to this approach as the "control correction method" (CCM). Using replicate arrays, we identified a decrease in proliferation genes and an increase in differentiation genes. Using an arbitrary cut-off of 1.7-fold and p values <0.05, we identified a total of 32 differentially expressed genes, 9 with the dye-swap method, 18 with the CCM, and 5 genes with both methods. 23 of these 32 genes were subsequently verified by northern blotting. Most of these were <2-fold changes. While the dye-swap method (using either ANOVA or Bayesian analysis) detected a smaller number of genes (14–16) compared to the CCM (46), it was more accurate (89–92% vs. 75%). Compared to the northern blot results, for most genes, the microarray results underestimated the fold change, implicating the importance of detecting these small changes. CONCLUSIONS: We validated two experimental design paradigms for cDNA microarray experiments capable of detecting small (<2-fold) changes in gene expression with excellent fidelity that revealed potentially important genes associated with the anti-proliferative effects of neuregulin on MCF10AT breast epithelial cells