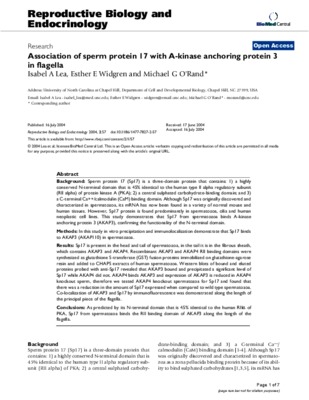 BACKGROUND: Sperm protein 17 (Sp17) is a three-domain protein that contains: 1) a highly conserved N-terminal domain that is 45% identical to the human type II alpha regulatory subunit (RII alpha) of protein kinase A (PKA); 2) a central sulphated carbohydrate-binding domain; and 3) a C-terminal Ca++/calmodulin (CaM) binding domain. Although Sp17 was originally discovered and characterized in spermatozoa, its mRNA has now been found in a variety of normal mouse and human tissues. However, Sp17 protein is found predominantly in spermatozoa, cilia and human neoplastic cell lines. This study demonstrates that Sp17 from spermatozoa binds A-kinase anchoring protein 3 (AKAP3), confirming the functionality of the N-terminal domain. METHODS: In this study in vitro precipitation and immunolocalization demonstrate that Sp17 binds to AKAP3 (AKAP110) in spermatozoa. RESULTS: Sp17 is present in the head and tail of spermatozoa, in the tail it is in the fibrous sheath, which contains AKAP3 and AKAP4. Recombinant AKAP3 and AKAP4 RII binding domains were synthesized as glutathione S-transferase (GST) fusion proteins immobilized on glutathione-agarose resin and added to CHAPS extracts of human spermatozoa. Western blots of bound and eluted proteins probed with anti-Sp17 revealed that AKAP3 bound and precipitated a significant level of Sp17 while AKAP4 did not. AKAP4 binds AKAP3 and expression of AKAP3 is reduced in AKAP4 knockout sperm, therefore we tested AKAP4 knockout spermatozoa for Sp17 and found that there was a reduction in the amount of Sp17 expressed when compared to wild type spermatozoa. Co-localization of AKAP3 and Sp17 by immunofluorescence was demonstrated along the length of the principal piece of the flagella. CONCLUSIONS: As predicted by its N-terminal domain that is 45% identical to the human RIIα of PKA, Sp17 from spermatozoa binds the RII binding domain of AKAP3 along the length of the flagella