BACKGROUND: We have compared 38 isolates of the SARS-CoV complete genome. The main goal was twofold: first, to analyze and compare nucleotide sequences and to identify positions of single nucleotide polymorphism (SNP), insertions and deletions, and second, to group them according to sequence similarity, eventually pointing to phylogeny of SARS-CoV isolates. The comparison is based on genome polymorphism such as insertions or deletions and the number and positions of SNPs. RESULTS: The nucleotide structure of all 38 isolates is presented. Based on insertions and deletions and dissimilarity due to SNPs, the dataset of all the isolates has been qualitatively classified into three groups each having their own subgroups. These are the A-group with "regular" isolates (no insertions / deletions except for 5' and 3' ends), the B-group of isolates with "long insertions", and the C-group of isolates with "many individual" insertions and deletions. The isolate with the smallest average number of SNPs, compared to other isolates, has been identified (TWH). The density distribution of SNPs, insertions and deletions for each group or subgroup, as well as cumulatively for all the isolates is also presented, along with the gene map for TWH. Since individual SNPs may have occurred at random, positions corresponding to multiple SNPs (occurring in two or more isolates) are identified and presented. This result revises some previous results of a similar type. Amino acid changes caused by multiple SNPs are also identified (for the annotated sequences, as well as presupposed amino acid changes for non-annotated ones). Exact SNP positions for the isolates in each group or subgroup are presented. Finally, a phylogenetic tree for the SARS-CoV isolates has been produced using the CLUSTALW program, showing high compatibility with former qualitative classification. CONCLUSIONS: The comparative study of SARS-CoV isolates provides essential information for genome polymorphism, indication of strain differences and variants evolution. It may help with the development of effective treatment 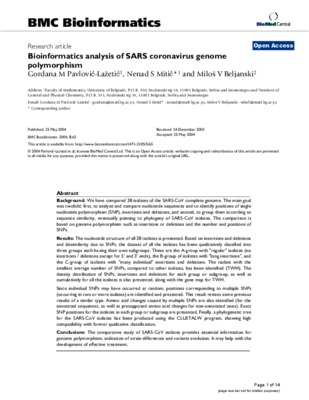