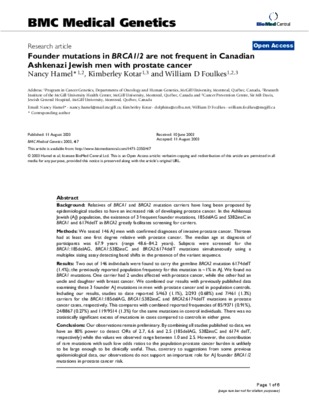 BACKGROUND: Relatives of BRCA1 and BRCA2 mutation carriers have long been proposed by epidemiological studies to have an increased risk of developing prostate cancer. In the Ashkenazi Jewish (AJ) population, the existence of 3 frequent founder mutations, 185delAG and 5382insC in BRCA1 and 6174delT in BRCA2 greatly facilitates screening for carriers. METHODS: We tested 146 AJ men with confirmed diagnoses of invasive prostate cancer. Thirteen had at least one first degree relative with prostate cancer. The median age at diagnosis of participants was 67.9 years (range 48.6–84.2 years). Subjects were screened for the BRCA1:185delAG, BRCA1:5382insC and BRCA2:6174delT mutations simultaneously using a multiplex sizing assay detecting band shifts in the presence of the variant sequence. RESULTS: Two out of 146 individuals were found to carry the germline BRCA2 mutation 6174delT (1.4%); the previously reported population frequency for this mutation is ~1% in AJ. We found no BRCA1 mutations. One carrier had 2 uncles affected with prostate cancer, while the other had an uncle and daughter with breast cancer. We combined our results with previously published data examining these 3 founder AJ mutations in men with prostate cancer and in population controls. Including our results, studies to date reported 5/463 (1.1%), 2/293 (0.68%) and 7/461 (1.3%) carriers for the BRCA1:185delAG, BRCA1:5382insC and BRCA2:6174delT mutations in prostate cancer cases, respectively. This compares with combined reported frequencies of 85/9371 (0.91%), 24/8867 (0.27%) and 119/9514 (1.3%) for the same mutations in control individuals. There was no statistically significant excess of mutations in cases compared to controls in either gene. CONCLUSIONS: Our observations remain preliminary. By combining all studies published to date, we have an 80% power to detect ORs of 2.7, 6.6 and 2.5 (185delAG, 5382insC and 6174 delT, respectively) while the values we observed range between 1.0 and 2.5. However, the contribution of rare mutations with such low odds ratios to the population prostate cancer burden is unlikely to be large enough to be clinically useful. Thus, contrary to suggestions from some previous epidemiological data, our observations do not support an important role for AJ founder BRCA1/2 mutations in prostate cancer risk