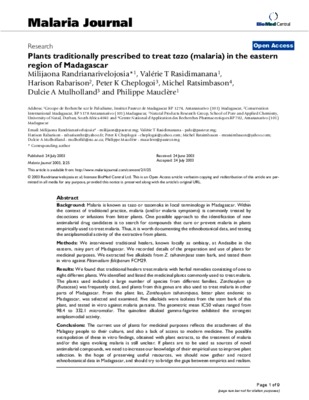 BACKGROUND: Malaria is known as tazo or tazomoka in local terminology in Madagascar. Within the context of traditional practice, malaria (and/or malaria symptoms) is commonly treated by decoctions or infusions from bitter plants. One possible approach to the identification of new antimalarial drug candidates is to search for compounds that cure or prevent malaria in plants empirically used to treat malaria. Thus, it is worth documenting the ethnobotanical data, and testing the antiplasmodial activity of the extractive from plants. METHODS: We interviewed traditional healers, known locally as ombiasy, at Andasibe in the eastern, rainy part of Madagascar. We recorded details of the preparation and use of plants for medicinal purposes. We extracted five alkaloids from Z. tsihanimposa stem bark, and tested them in vitro against Plasmodium falciparum FCM29. RESULTS: We found that traditional healers treat malaria with herbal remedies consisting of one to eight different plants. We identified and listed the medicinal plants commonly used to treat malaria. The plants used included a large number of species from different families. Zanthoxylum sp (Rutaceae) was frequently cited, and plants from this genus are also used to treat malaria in other parts of Madagascar. From the plant list, Zanthoxylum tsihanimposa, bitter plant endemic to Madagascar, was selected and examined. Five alkaloids were isolates from the stem bark of this plant, and tested in vitro against malaria parasite. The geometric mean IC50 values ranged from 98.4 to 332.1 micromolar. The quinoline alkaloid gamma-fagarine exhibited the strongest antiplasmodial activity. CONCLUSIONS: The current use of plants for medicinal purposes reflects the attachment of the Malagasy people to their culture, and also a lack of access to modern medicine. The possible extrapolation of these in vitro findings, obtained with plant extracts, to the treatment of malaria and/or the signs evoking malaria is still unclear. If plants are to be used as sources of novel antimalarial compounds, we need to increase our knowledge of their empirical use to improve plant selection. In the hope of preserving useful resources, we should now gather and record ethnobotanical data in Madagascar, and should try to bridge the gaps between empirics and realism