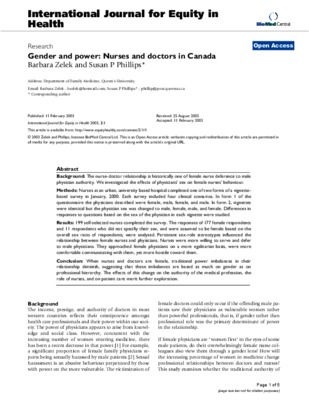 Gender and power: Nurses and doctors in Canada

By Barbara Zelek and Susan P Phillips
Get PDF (207 KB)

BACKGROUND: The nurse-doctor relationship is historically one of female nurse deference to male physician authority. We investigated the effects of physicians' sex on female nurses' behaviour. METHODS: Nurses at an urban, university based hospital completed one of two forms of a vignette-based survey in January, 2000. Each survey included four clinical scenarios. In form 1 of the questionnaire the physicians described were female, male, female, and male. In form 2, vignettes were identical but the physician sex was changed to male, female, male, and female. Differences in responses to questions based on the sex of the physician in each vignette were studied RESULTS: 199 self-selected nurses completed the survey. The responses of 177 female respondents and 11 respondents who did not specifiy their sex, and were assumed to be female based on the overall sex ratio of respondents, were analysed. Persistent sex-role stereotypes influenced the relationship between female nurses and physicians. Nurses were more willing to serve and defer to male physicians. They approached female physicians on a more egalitarian basis, were more comfortable communicating with them, yet more hostile toward them. CONCLUSION: When nurses and doctors are female, traditional power imbalances in their relationship diminish, suggesting that these imbalances are based as much on gender as on professional hierarchy. The effects of this change on the authority of the medical profession, the role of nurses, and on patient care merit further exploration