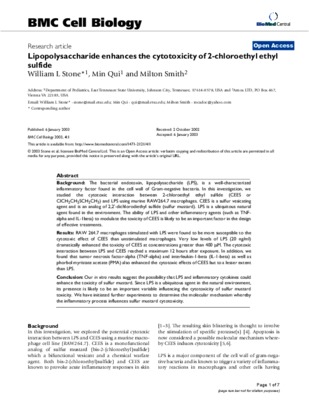 BACKGROUND: The bacterial endotoxin, lipopolysaccharide (LPS), is a well-characterized inflammatory factor found in the cell wall of Gram-negative bacteria. In this investigation, we studied the cytotoxic interaction between 2-chloroethyl ethyl sulfide (CEES or ClCH(2)CH(2)SCH(2)CH(3)) and LPS using murine RAW264.7 macrophages. CEES is a sulfur vesicating agent and is an analog of 2,2'-dichlorodiethyl sulfide (sulfur mustard). LPS is a ubiquitous natural agent found in the environment. The ability of LPS and other inflammatory agents (such as TNF-alpha and IL-1beta) to modulate the toxicity of CEES is likely to be an important factor in the design of effective treatments. RESULTS: RAW 264.7 macrophages stimulated with LPS were found to be more susceptible to the cytotoxic effect of CEES than unstimulated macrophages. Very low levels of LPS (20 ng/ml) dramatically enhanced the toxicity of CEES at concentrations greater than 400 μM. The cytotoxic interaction between LPS and CEES reached a maximum 12 hours after exposure. In addition, we found that tumor necrosis factor-alpha (TNF-alpha) and interleukin-1-beta (IL-1-beta) as well as phorbol myristate acetate (PMA) also enhanced the cytotoxic effects of CEES but to a lesser extent than LPS. CONCLUSION: Our in vitro results suggest the possibility that LPS and inflammatory cytokines could enhance the toxicity of sulfur mustard. Since LPS is a ubiquitous agent in the natural environment, its presence is likely to be an important variable influencing the cytotoxicity of sulfur mustard toxicity. We have initiated further experiments to determine the molecular mechanism whereby the inflammatory process influences sulfur mustard cytotoxicity