The relationship between music, moving images and colour is one that has long exerted a fascination over artists, practitioners and theorists. It is a compelling topic now because this question very directly illuminates ideas in the area of digital music and performance as laptop performance gives opportunities for real time work with visuals and sound. In this project I explored this rich field by creating six works (including two compositions and four experimentations), closely related to each other, which dramatised tensions between the natural and industrialized world through different audio, visual and musical treatments, but always beginning with the same source visual material. My processes were informed by the insights of three theorists, and finding ways of applying and interpreting them in performance contexts. The three theorists whose ideas most concerned me were Michel Chion (France, 1947), Raymond Murray Schafer (Canada, 1933) and Nicholas Cook (Greece, 1950). To explain the relationship between music and visuals in my project, I utilized Nicholas Cook’s triadic model of contest, conformance and complementation, as described in his book Analysing Musical Multimedia (Oxford University Press, 2000). The works created for this project displayed at least one strongly differentiated musical component in each of the pieces. For the visuals I decided to use (1) my own footage from natural landscapes and (2) footage from cityscapes to create a sharp visual juxtaposition. For the processing of the natural images, I made reference to Stan Brakhage’s experimental film ‘The Dead’ (1960 – 11 minutes, 16 millimeters). It’s a deathly, evocative walk through a cemetery through the non-attached, deviating camera of Brakhage, accompanied with a wide range of film effects such as superimpositions, solarized film fragments and overexposures (loss of highlight detail). In “The Dead”, the images are tightly crossfaded (layered), a technique which prevents the viewer from focusing on a specific image yet still being in context of the film content. In addition, material objects can be located in The Dead. Statues are dominant in it, and Brakhage’s sloping angles, solarization, and superimpositions with the noble mausoleums illustrate them as evil spirits that haunt these large tombs rather than supervising them in protection. What I have learned from Brakhage’s work is that experimenting with film techniques such as image superimposition, color inversion, and overexposures over a series of visuals which are related to each other thematologically, and applying these techniques on the film in an appropriate way, leads to a more poetic representation of the visuals where the film’s context is not a result of the primitive visual material but of the way the visual techniques are applied. In other words, the meaning of the film is not defined by its primitive content but by the techniques applied. This eases the filmmaker to focus on different aspects of the film. For instance Brakhage in his film “The Dead” made use of the techniques mentioned above (image superimposition, color inversion, and overexposures) to depict the world from the viewpoint of a spirit. In addition, he combined these techniques with camera swerving so as to imitate the movement of the spirit itself. Learning from this, I crossfaded water images with color-inverted mountain images in the natural video sections, creating a similar effect that Brakhage creates in “The Dead” with the use of his layering techniques. Thus, I indicated my artistic decision of the presence of harmony in nature with the use of color inversion, color correction and image superimposition versus the intense footage from urban centers where I kept the imagery unprocessed and in black and white. Any stretched sound used in this project was created with “Hypermammuth Paulstretch”; a software applying time-stretching algorithm on any .wav, .ogg or .mp3 sound input. Paulstretch is freeware software that I got from the website: http://hypermammut.sourceforge.net/paulstretch/ Paul Nasca was the developer of this software. His webpage is: http://www.paulnasca.com As it is clearly described in his website: http://www.paulnasca.com/open-sourceprojects# TOC-Paul-s-Extreme-Sound-Stretch, this program produces high quality sounds without the presence of any ‘artefacts’ even if the original source sound undergoes extreme stretching. This is the reason why I decided to use this software. The output stretched sound is very clear and depending on the original source, the processed sound either retains some characteristics of the original or it has a completely different texture. This can lead to the production of a wide variety of processed sound effects that I was very interested in exploring in my project 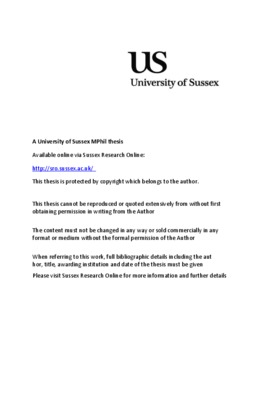 This paper was published in Sussex Research Online.