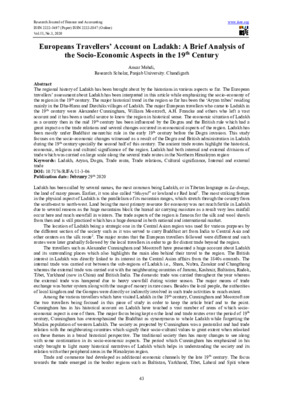 Europeans Travellers’ Account on Ladakh: A Brief Analysis of the Socio-Economic Aspects in the 19th Century

The regional history of Ladakh has been brought about by the historians in various aspects so far. The European travellers’ assessment about Ladakh has been interpreted in this article while emphasizing the socio-economy of the region in the 19th century. The major historical trend in the region so far has been the ‘Aryan tribes’ residing mainly in the Dha-Hanu and Darchiks villages of Ladakh. The major European travellers who came to Ladakh in the 19th century were Alexander Cunningham, William Moorcroft, A.H. Francke and others who left a vast account and it has been a useful source to know the region in historical sense. The economic situation of Ladakh as a country then in the mid 19th century has been influenced by the Dogras and the British rule which had a great impact on the trade relations and several changes occurred in economical aspects of the region. Ladakh has been mostly under Buddhist monarchic rule in the early 19th century before the Dogra invasion. This study focuses on the socio-economic changes witnessed as a result of the Dogra and British administration in Ladakh during the 19th century specially the second half of this century. The ancient trade routes highlight the historical, economic, religious and cultural significance of the region. Ladakh had both internal and external divisions of trade which was carried on large scale along the several trade routes in the Northern Himalayan region. Keywords: Ladakh, Aryan, Dogra, Trade route, Trade relations, Cultural significance, Internal and external trade DOI: 10.7176/RJFA/11-3-06 Publication date: February 29th 202