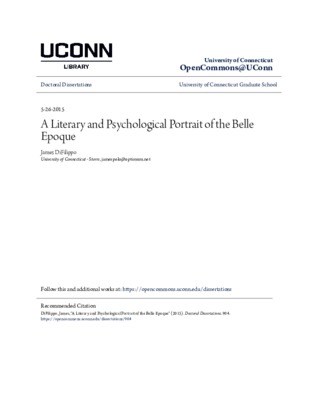 A Literary and Psychological Portrait of the Belle Epoque

By James DiFilippo
Get PDF (2 MB)

This dissertation depicts the Belle Epoque (1870-1914) whose Zeitgeist was epitomized by the motto, fluctuat, nec mergitur (Willms 339). The transformation in the spirit of Europe revealed the emergence of the conscious, the influence of the unconscious and the discovery of psychoanalysis. Although the fin de siècle was a period of degeneration, the epoch also represented hope for a new beginning. The Belle Epoque in Paris displayed a coat of arms that represented a metaphorical emblem of a tumultuous, sailing ship having an unattainable destination. The national self-awareness engendered a collective pathology, self-confidence and pride that characterized the consciousness of an age. In order to appreciate Nana (1880), the ninth volume in the Rougon-Macquart series by Emile Zola (1840-1902), and Divinas palabras: tragicomedia de aldea (1920), heralding from the trilogy, Comedias barbaras (Aguila de blazon, 1907; Romance de lobos, 1908; and Cara de plata, 1923) by Valle-Inclan (1866-1936), one must have an understanding of this extraordinarily dynamic and creative period. The psychoanalytic perspectives of autre ( ego ) and Autre ( unconscious ) established by Freud, the concept of le stade du miroir ( the mirror stage ) and the ideology of desir ( desire ) propagated by Lacan, and the distinctive tenets of mimesis, sacrifice and skandalon ( scandal ) or pierre d\u27achoppement ( stumbling block ) advocated by Girard, renders an interdisciplinary, as well as intertextual analysis of the representative masterpieces, Nana and Divinas palabras, and bring to light a new understanding of literature of the Belle Epoque. Lacan also advocates that literature reflects paradigms that enable the psychoanalyst and the analysand to fathom dreams, symptoms and parapraxes, and adheres to Freud in the tenet that there is a liaison between real case studies and the literary domain. Another phenomenon of the Belle Epoque was the drama, La femme X..., by master playwright, Alexandre Bisson (1848-1912). This histoire de coeur spans a century, having been translated into fifteen international film versions, the most in the history of film. Analogous to Madame X, another famous heroine, Madame Henriette de Mortsauf, the chatelaine and l\u27ange de Clochegourde in Le lys dans la vallee by Honore de Balzac (1799-1850), also sacrifices herself for love, having psychological ramifications which result in her death