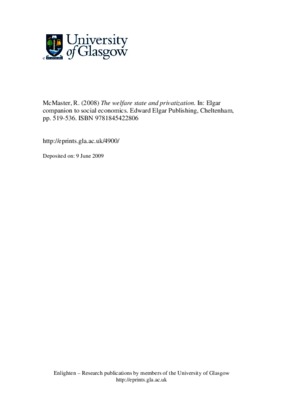 The welfare state and privatization

The “Great Capitalist Restoration” (Stanfield and Stanfield, 1996) from the 1970s/80s onward is predicated upon powerful convictions centring on economic efficiency and development, and the freedom and dignity of the individual. Indeed, so powerful are these convictions that they exude the aura of conventional wisdom. The welfare state has been, and continues to be, a prominent locus for these arguments. Yet there is some ambiguity concerning the nature of the ‘welfare state’ and what is meant by ‘privatization’. It is beyond the parameters of this chapter to furnish a comprehensive account of the complexities of this contested terrain, but nonetheless, some attempt will be made in furnishing definitions that act as entry points to the principal focus of the discussion. This relates to an aspect of the second claim noted above: dignity. Neo-liberalism embeds dignity in a particular conceptualisation of individual freedom. In this literature, as Sen (1993) observed, freedom- achievements are associated with welfare-achievements. For example, Wiseman (1991) contests that if “welfare” is identified with the “existence of caring feelings” then the market is revealed as not only the conduit to greater welfare and individual freedom, but also care and dignity. Of necessity the paper is general in nature as it endeavours to address important conceptual issues. The following section considers the analytical terrain by briefly reviewing some definitional issues. Thereafter the rationale for ‘privatization’ and recent trends in associated approaches are noted, with a contrasting social economics perspective advanced. Social economists also stress the importance of human dignity within the social provisioning process that is the economy. This has led Wisman (2003: 442) to observe that the scope of social economics encapsulates as its primary task the analysis of the requisites of “the good and just society”. Hence, in contrast to much of the underlying economic rationale for the “Great Capitalist Restoration”, or neo-liberalism, there is an explicit recognition that the Humean fault line between the positive and normative is more illusory than real. In setting out to investigate parameters of Wisman’s “good and just society” explicit recognition of human needs (O’Boyle, 2005) and the contours of “living standards” (Figart, 2007) are both necessary if not sufficient. Drawing from this literature this chapter argues that the patterns of welfare state reform, primarily through some form of privatization, are not as persuasively related to the enhancement of human dignity as its advocates suggest