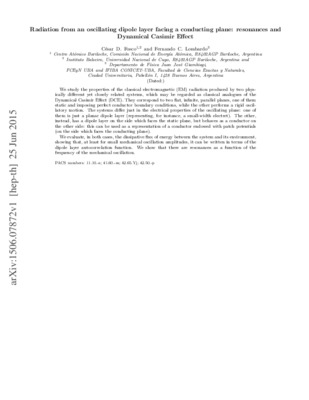 We study the properties of the classical electromagnetic (EM) radiation produced by two physically different yet closely related systems, which may be regarded as classical analogues of the Dynamical Casimir Effect (DCE). They correspond to two flat, infinite, parallel planes, one of them static and imposing perfect conductor boundary conditions, while the other performs a rigid oscillatory motion. The systems differ just in the electrical properties of the oscillating plane: one of them is just a planar dipole layer (representing, for instance, a small-width electret). The other, instead, has a dipole layer on the side which faces the static plane, but behaves as a conductor on the other side: this can be used as a representation of a conductor endowed with patch potentials (on the side which faces the conducting plane). We evaluate, in both cases, the dissipative flux of energy between the system and its environment, showing that, at least for small mechanical oscillation amplitudes, it can be written in terms of the dipole layer autocorrelation function. We show that there are resonances as a function of the frequency of the mechanical oscillation.Comment: 11 pages, 2 figure