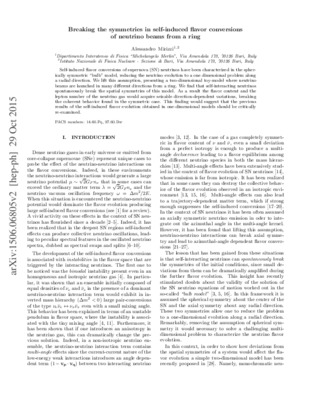 By Alessandro Mirizzi
Get PDF (3 MB)

Self-induced flavor conversions of supernova (SN) neutrinos have been characterized in the spherically symmetric "bulb" model, reducing the neutrino evolution to a one dimensional problem along a radial direction. We lift this assumption, presenting a two-dimensional toy-model where neutrino beams are launched in many different directions from a ring. We find that self-interacting neutrinos spontaneously break the spatial symmetries of this model. As a result the flavor content and the lepton number of the neutrino gas would acquire seizable direction-dependent variations, breaking the coherent behavior found in the symmetric case. This finding would suggest that the previous results of the self-induced flavor evolution obtained in one-dimensional models should be critically re-examined.Comment: v2 (8 pages, 9 eps figures): Revised version. Major changes. Model improved and clarified. Calculations and figures updated. Matches the version accepted for publication on PR