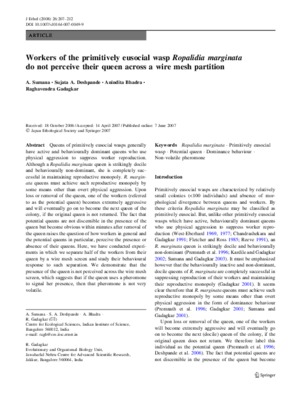 By A. Sumana, Sujata A. Deshpande, Anindita Bhadra and Raghavendra Gadagkar
Get PDF (272 KB)

Queens of primitively eusocial wasps generally have active and behaviourally dominant queens who use physical aggression to suppress worker reproduction. Although a Ropalidia marginata queen is strikingly docile and behaviourally non-dominant, she is completely successful in maintaining reproductive monopoly. R. marginata queens must achieve such reproductive monopoly by some means other than overt physical aggression. Upon loss or removal of the queen, one of the workers (referred to as the potential queen) becomes extremely aggressive and will eventually go on to become the next queen of the colony, if the original queen is not returned. The fact that potential queens are not discernible in the presence of the queen but become obvious within minutes after removal of the queen raises the question of how workers in general and the potential queens in particular, perceive the presence or absence of their queens. Here, we have conducted experiments in which we separate half of the workers from their queen by a wire mesh screen and study their behavioural response to such separation. We demonstrate that the presence of the queen is not perceived across the wire mesh screen, which suggests that if the queen uses a pheromone to signal her presence, then that pheromone is not very volatile