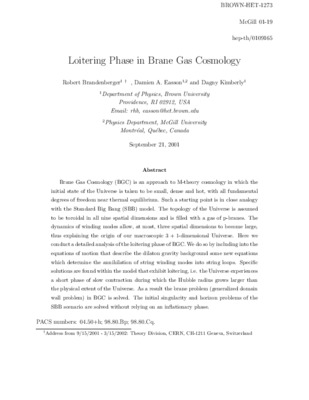 Brane Gas Cosmology (BGC) is an approach to M-theory cosmology in which the initial state of the Universe is taken to be small, dense and hot, with all fundamental degrees of freedom near thermal equilibrium. Such a starting point is in close analogy with the Standard Big Bang (SBB) model. The topology of the Universe is assumed to be toroidal in all nine spatial dimensions and is filled with a gas of p-branes. The dynamics of winding modes allow, at most, three spatial dimensions to become large, thus explaining the origin of our macroscopic 3+1-dimensional Universe. Here we conduct a detailed analysis of the loitering phase of BGC. We do so by including into the equations of motion that describe the dilaton gravity background some new equations which determine the annihilation of string winding modes into string loops. Specific solutions are found within the model that exhibit loitering, i.e. the Universe experiences a short phase of slow contraction during which the Hubble radius grows larger than the physical extent of the Universe. As a result the brane problem (generalized domain wall problem) in BGC is solved. The initial singularity and horizon problems of the SBB scenario are solved without relying on an inflationary phase