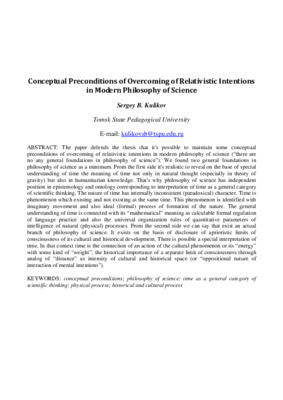 The paper defends the thesis that it's possible to maintain some conceptual preconditions of overcoming of relativistic intentions in modern philosophy of science ("there are no any general foundations in philosophy of science"). We found two general foundations in philosophy of science as a minimum. From the first side it's realistic to reveal on the base of special understanding of time the value of time not only in natural thought (especially in theory of gravity) but also in humanitarian knowledge. That's why philosophy of science has independent position in epistemology and ontology corresponding to interpretation of time as a general category of scientific thinking. The nature of time has internally inconsistent (paradoxical) character. Time is phenomenon which existing and not existing at the same time. This phenomenon is identified with imaginary movement and also ideal (formal) process of formation of the nature. The general understanding of time is connected with its "mathematical" meaning as calculable formal regulation of language practice and also the universal organization rules of quantitative parameters of intelligence of natural (physical) processes. From the second side we can say that exist an actual branch of philosophy of science. It exists on the basis of disclosure of aprioristic limits of consciousness of its cultural and historical development. There is possible a special interpretation of time. In that context time is the connection of an action of the cultural phenomenon or its "energy" with some kind of "weight", the historical importance of a separate limit of consciousness through analog of "distance" as intensity of cultural and historical space (or "oppositional nature of interaction of mental intentions").Comment: 6 pages, conference "Science and Education" (Russia, Tomsk, 19-23 April, 2010), translated from Russian by autho