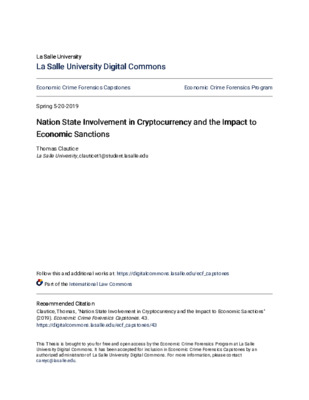 Nation State Involvement in Cryptocurrency and the Impact to Economic Sanctions

With all the terms and evolving definitions of distributed ledger technology, blockchain, cryptocurrency, and digital currency, it is no wonder they have caused disruption and confusion to the current state of economic sanctions. Sanctioned individuals and countries may actively seek to evade the regulatory oversight of transactions that are completed in the United States dollar using cryptocurrency. The United States and the United Nations have used economic sanctions as a tool of encouragement, and punishment, for decades in the traditional banking and financial services space. Cryptocurrency has not easily fallen under this regulatory environment due to its decentralized nature, and bad actors have taken advantage of the lack of oversight. Financial institutions and money service businesses have been actively involved through regulations in sanctions evasion prevention, anti-money laundering, and the prevention of terrorist financing for decades. Governments have not been quick to adopt these same regulations for cryptocurrency exchanges. This paper focuses on the Democratic People’s Republic of Korea, their sanctions, and how the country has entered the cryptocurrency space. In addition, it explores how the United States has used economic sanctions in the past, how it has tackled regulation of cryptocurrency and sanctions, and how certain countries have responded