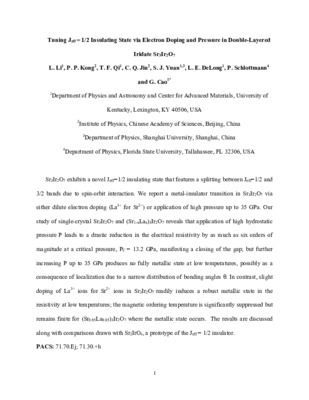 Sr3Ir2O7 exhibits a novel Jeff=1/2 insulating state that features a splitting between Jeff=1/2 and 3/2 bands due to spin-orbit interaction. We report a metal-insulator transition in Sr3Ir2O7 via either dilute electron doping (La3+ for Sr2+) or application of high pressure up to 35 GPa. Our study of single-crystal Sr3Ir2O7 and (Sr1-xLax)3Ir2O7 reveals that application of high hydrostatic pressure P leads to a drastic reduction in the electrical resistivity by as much as six orders of magnitude at a critical pressure, PC = 13.2 GPa, manifesting a closing of the gap; but further increasing P up to 35 GPa produces no fully metallic state at low temperatures, possibly as a consequence of localization due to a narrow distribution of bonding angles {\theta}. In contrast, slight doping of La3+ ions for Sr2+ ions in Sr3Ir2O7 readily induces a robust metallic state in the resistivity at low temperatures; the magnetic ordering temperature is significantly suppressed but remains finite for (Sr0.95La0.05)3Ir2O7 where the metallic state occurs. The results are discussed along with comparisons drawn with Sr2IrO4, a prototype of the Jeff = 1/2 insulator.Comment: five figure