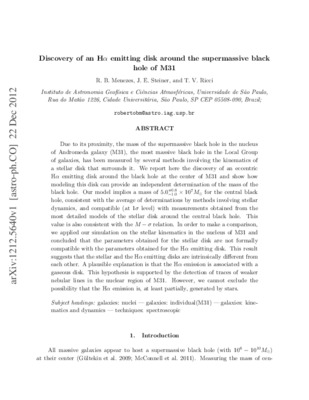 Due to its proximity, the mass of the supermassive black hole in the nucleus of Andromeda galaxy (M31), the most massive black hole in the Local Group of galaxies, has been measured by several methods involving the kinematics of a stellar disk that surrounds it. We report here the discovery of an eccentric Halpha emitting disk around the black hole at the center of M31 and show how modeling this disk can provide an independent determination of the mass of the black hole. Our model implies a mass of 5.0_{-1.0}^{+0.8} x 10^7 Mo for the central black hole, consistent with the average of determinations by methods involving stellar dynamics, and compatible (at 1-sigma level) with measurements obtained from the most detailed models of the stellar disk around the central black hole. This value is also consistent with the M-sigma relation. In order to make a comparison, we applied our simulation on the stellar kinematics in the nucleus of M31 and concluded that the parameters obtained for the stellar disk are not formally compatible with the parameters obtained for the Halpha emitting disk. This result suggests that the stellar and the Halpha emitting disks are intrinsically different from each other. A plausible explanation is that the Halpha emission is associated with a gaseous disk. This hypothesis is supported by the detection of traces of weaker nebular lines in the nuclear region of M31. However, we cannot exclude the possibility that the Halpha emission is, at least partially, generated by stars.Comment: 13 pages, 3 figures, 1 tabl