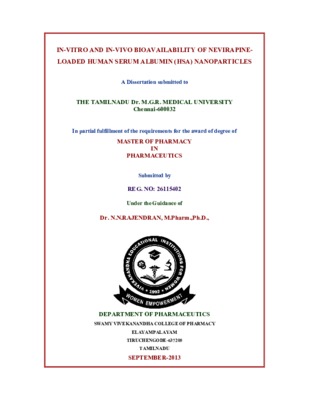 Bioavailability of nevirapine from the currently available tablet dosage form remains a concern for effective control of HIV infection. The present study attempted to develop nevirapine nanoparticles using human serum albumin (HSA) as polymer in varied concentrations and to evaluate for physico-chemical, in-vitro and in-vivo release characteristics. Three formulations F1, F2, and F3 were developed using drug:polymer ratios 1:1,1:2 and 1:4 respectively by desolvation method. The particle size of F1, F2, F3 was 298, 495 and 698nm respectively. The zeta potential of F1, F2 and F3 was -0.27,-0.22and-0.18mV respectively The PDI of all formulations was less than 0.5 showing homogenous dispersion of nevirapine. The dissolution and diffusion profile of the drug showed that F1 was found to meet the requirement of not less than 85% drug release at 24h with zero order kinetic (r2 0.99). The Cmax, AUC0-24, and AUC0-∞ were significantly (p < 0.001) higher than that of neviripine alone. Significant change in Tmax of F1 was observed as compared to nevirapine alone. The results of the study revealed that nevirapine nanoparticle is beneficial in improving the bioavailability of the drug. It can be conclusively stated that nevirapine loaded - HSA nanoparticles may be better than the conventional tablet dosage form for the treatment of HIV infection