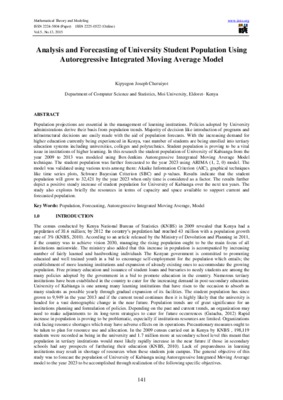 Population projections are essential in the management of learning institutions. Policies adopted by University administrations derive their basis from population trends. Majority of decision like introduction of programs and infrastructural decisions are easily made with the aid of population forecasts. With the increasing demand for higher education currently being experienced in Kenya, vast number of students are being enrolled into tertiary education systems including universities, colleges and polytechnics. Student population is proving to be a vital issue in institutions of higher learning. In this research the student population of University of Kabianga from the year 2009 to 2013 was modeled using Box-Jenkins Autoregressive Intergrated Moving Average Model technique. The student population was further forecasted to the year 2023 using ARIMA (1, 2, 0) model. The model was validated using various tests among them: Akaike Information Criterion (AIC), graphical techniques like time series plots, Schwarz Bayesian Criterion (SBC) and p-values. Results indicate that the student population will grow to 32,421 by the year 2023 when only time is considered as a factor. The results further depict a positive steady increase of student population for University of Kabianga over the next ten years. The study also explores briefly the resources in terms of capacity and space available to support current and forecasted population. Key Words: Population, Forecasting, Autoregressive Integrated Moving Average, Mode