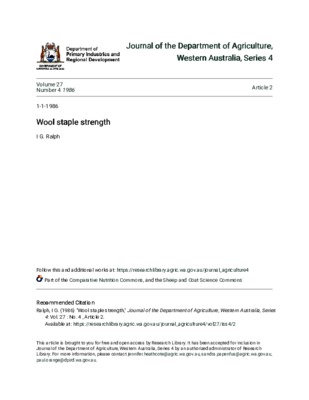 The staple strength of western Australia\u27s wool has come under scruitiny since additional wool measurements to those of yield, fibre diameter and vegetable matter began throughout the Australian 985-86 wool selling season. In 1980, the Sale by Additional Measurement Trial conducted on the September-October wool sales at Fremantle showed a range in staple breaking forcesfrom 10 to 70 Newtons per kilotex, with an average breaking force of between 30 and 35 N/ktex, A third of the lots offered for sale had a staple breaking force of less than 26 N/ktex, a value which, according to the Australian Wool Testing Authority, marks the level of strenght below which wool buyers in the past began imposing a price discount for poor staple strength. Based on the 1986-87 price discounts which are included in the Australian Wool Corporation Minimum Recerve Price Schedule, this third of the Western Australian wool clip could have incurred a price penalty of 24c/kg clean or more. The normal annual loss of revenue to the State\u27s wool producers incurred by low wool staple strength is likely to be at least $2 millio