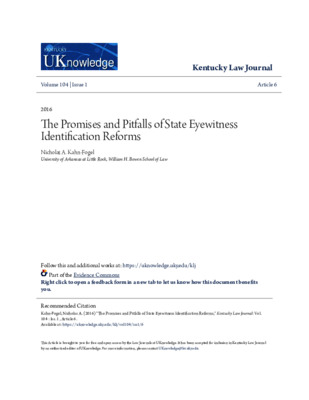 The Promises and Pitfalls of State Eyewitness Identification Reforms

By Nicholas A. Kahn-Fogel
Get PDF (4 MB)

This article provides a comprehensive analysis of state-based eyewitness identification reforms, including legislative directives, evidentiary rules, and judicial interpretations of state constitutions as providing greater protection against the use of unreliable eyewitness evidence than the United State Supreme Court offered in its 1977 decision in Manson v. Brathwaite. While previous scholarship has included thorough consideration of a single state\u27s eyewitness law, state-by-state analysis of a sub-issue in eyewitness law, and brief general surveys of state approaches to eyewitness reform, this article adds to the current body of scholarship with an in-depth evaluation of eyewitness identification law in states that have either rejected the federal constitutional test or have adopted other statewide measures to reduce the likelihood of wrongful conviction through eyewitness misidentification. The analysis is based not only on examination of the texts of legislative directives and of the seminal state judicial opinions that scholars have cited previously as examples of state alternatives to Manson, but also on assessment of the subsequent application and qualification of those opinions, often in ways that have undermined the modest progress of the earlier decisions. This evaluation demonstrates that incremental, state-based reforms have been significantly less promising than the qualfied praise they have received would suggest. For states that have expressed a commitment to assessing eyewitness evidence in accord with scientific developments, this article\u27s exposure of the conceptual inadequacy of many states\u27 measures, the inconsistent application of theoretically sound reorms, and, frequently, retreat from broad statements of dedication to the development of legal directives in harmony with scientific consensus, should serve as a caution and as an inspiration to do better. Ultimately, states should implement measures to ensure that law enforcement will conduct identification procedures in accord with best practices, and they should equi judges with the tools to prevent the use of unreliable eyewitness evidence in court