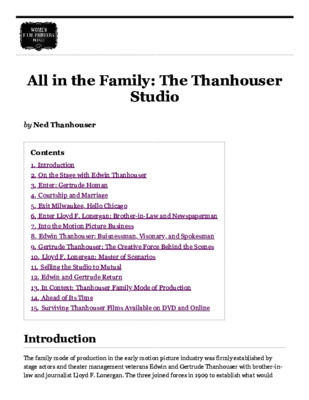 All in the Family: The Thanhouser Studio

The family mode of production in the early motion picture industry was firmly established by stage actors and theater management veterans Edwin and Gertrude Thanhouser with brother-in-law and journalist Lloyd F. Lonergan. The three joined forces in 1909 to establish what would become one of America’s pioneering independent silent motion picture studios during what is known as the “transitional” era in early cinema. The talent and the uniqueness of each family member blended seamlessly to create one of the most popular and successful independent motion picture production companies in America’s burgeoning motion picture industry. Under their leadership, the Thanhouser studio strove for and produced high quality films, and by the summer of 1910, Thanhouser films were praised by The New York Dramatic Mirror: “…Thanhouser pictures, of course, rank highest [among the independent producers]” (Woods 1910, 20). The Mutual Film Corporation, a major Chicago-based film distributor, recognized the success of this independent enterprise and, in April 1912, acquired the company under the leadership of Charles J. Hite as one of several to produce films to be distributed to exhibitors under the Mutual banner (McQuade 1912, 212)