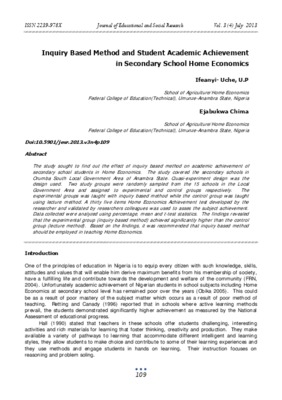 The study sought to find out the effect of inquiry based method on academic achievement of secondary school students in Home Economics. The study covered the secondary schools in Orumba South Local Government Area of Anambra State. Quasi-experiment design was the design used. Two study groups were randomly sampled from the 15 schools in the Local Government Area and assigned to experimental and control groups respectively. The experimental groups was taught with inquiry based method while the control group was taught using lecture method. A thirty five items Home Economics Achievement test developed by the researcher and validated by researchers colleagues was used to asses the subject achievement. Data collected were analyzed using percentage, mean and t-test statistics. The findings revealed that the experimental group (inquiry based method) achieved significantly higher than the control group (lecture method). Based on the findings, it was recommended that inquiry based method should be employed in teaching Home Economics. DOI: 10.5901/jesr.2013.v3n4p10