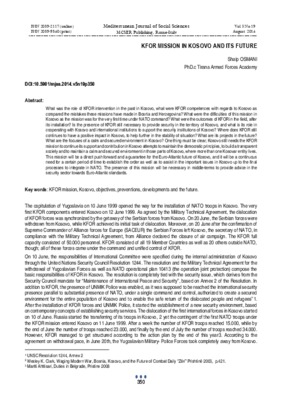 KFOR MISSION IN KOSOVO AND ITS FUTURE

What was the role of KFOR intervention in the past in Kosovo, what were KFOR competences with regards to Kosovo as compared the mistakes these missions have made in Bosnia and Herzegovina? What were the difficulties of this mission in Kosovo as the mission was for the very first time under NATO command? What were the outcomes of KFOR in the field, after its installation? Is the presence of KFOR still necessary to provide security in the territory of Kosovo, and what is its role in cooperating with Kosovo and international institutions to support the security institutions of Kosovo? Where does KFOR still continues to have a positive impact in Kosovo, to help further in the stability of situation? What are its projects in the future? What are the focuses of a calm and secured environment in Kosovo? One thing must be clear; Kosovo still needs the KFOR mission to continue its support and contribution in Kosovo attempts to maintain the democratic principles, to build a transparent society and to maintain a calm and secured environment in those parts of Kosovo, where more than one Kosovar entity lives. This mission will be a direct push forward and a guarantee for the Euro-Atlantic future of Kosovo, and it will be a continuous need for a certain period of time to establish the order as well as to assist in the important issues in Kosovo up to the final processes to integrate in NATO. The presence of this mission will be necessary in middle-terms to provide advice in the security sector towards Euro-Atlantic standards. DOI: 10.5901/mjss.2014.v5n19p35