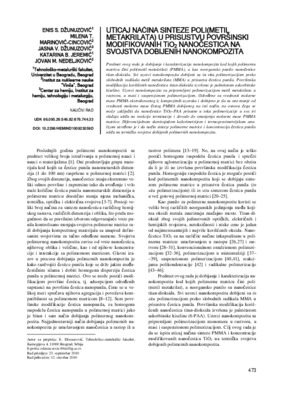 Incorporation of inorganic nanoparticles can significantly affect the properties of the polymer matrix. The properties of polymer nanocomposites depend on the type of incorporated nanoparticles, their size and shape, their concentration, and interactions with the polymer matrix. Homogeneity of polymer nanocomposites is influenced very much by the preparation method. In this study, TiO2 nanoparticles surface modified with 6-palmitate ascorbic acid (6-PAA) were encapsulated in poly(methyl methacrylate) (PMMA) by in situ radical polymerization of methyl methacrylate initiated by 2,2-azobisisobutyronitrile (AIBN). The surface modification of the TiO2 nanoparticles was achieved by the formation of a charge transfer complex between TiO2 nanoparticles and 6-palmitate ascorbic acid. The radical polymerization of MMA in the presence of TiO2-PAA nanoparticles was conducted in solution (PMMA/TiO2-PAA-R), in bulk (PMMA/TiO2-PAA-M) or in suspension (PMMA/TiO2-PAA-S). The main purpose of this study was to investigate the influence of the preparation method on the molar masses and thermal properties of PMMA/TiO2-PAA nanocomposite. It was obtained that molar masses of PMMA extracted from the composites had smaller values compared to molar masses of pure PMMA synthesized in the same manner, which indicated that TiO2-PAA nanoparticles affected the reaction of termination. Thermal properties were investigated by DSC and TGA. The values of glass transition temperature, T-g, were influenced by the way the radical polymerization was conducted, even in the case of the pure PMMA. The Tp(g) of composite samples was always smaller than the value of the corresponding PMMA sample and the smallest value was obtained for PMMA/TiO2- PAA-M since they contained the largest amount of low molar mass residue. The TGA results showed that thermal and thermooxidative stability of polymer composites obtained in solution and in suspension was better than for the pure PMMA obtained in the same way