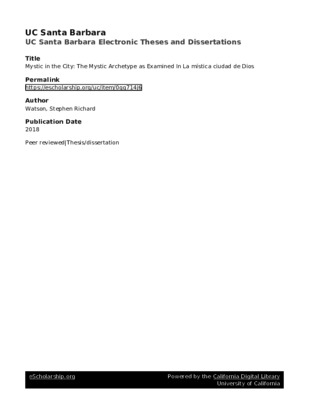 Mystic in the City: The Mystic Archetype as Examined In La mística ciudad de Dios

This paper examines the literary archetype of the mystic as understood and elaborated upon in religious literature at the twilight of the Spanish Golden Age. It then applies that archetype to the character of the Virgin Mary as she appears in Sor María de Agreda’s La mística ciudad de Dios. The first task is to define the mystic archetype as understood in the literary and religious traditions of the period. To accomplish this, we principally examine the writings of Santa Teresa de Jesús with a specific emphasis on El castillo interior. She was, herself, a noted mystic and wrote extensively about the mystic experience. Her writings heavily influenced those who came after her, including Sor María de Agreda, which is why her writings are used to construct our theoretical framework. Through her writings, the evolution of the mystic, the gradual metamorphosis from earnest disciple to the heights of metaphysical rapture, is made clear. In the pattern laid down by Santa Teresa, each step along the mystic journey serves to prepare the mystic for that which follows. This theme of stepwise preparation is a critical underpinning to the concept of the mystic as understood by Santa Teresa and her contemporaries.With this understanding in place, attention is then turned to the life of Sor María de Agreda and her own mystic experience. From a rigorously devout childhood and early exposure to mysticism in her own home, we witness her progression into a mature seeker of God’s divine influence. We examine the ways in which of her own lived experience either fulfills or defies the expectations of the mystic as laid down by tradition. We also analyze her exploration of the mystic archetype in some of her lesser-known writings. Her Escala espiritual, for example, is an instructional guide for those seeking mystic enlightenment.Finally, our attention turns to La mística ciudad de Dios. While Sor María claims that the work is, itself, the result of an extended visionary experience, the character of the Virgin Mary as presented in the work is also an exemplar of the mystic archetype. While Mary receives grand visions while still within her mother’s womb, she nonetheless grows and evolves in her relationship with the divine in a manner resembling the traditional mystic progression