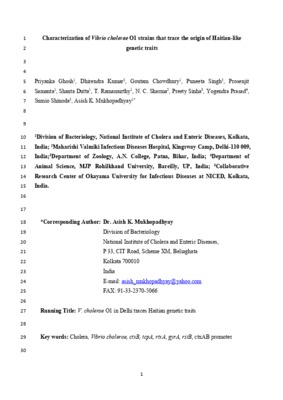 Vibrio cholerae O1 is the etiological agent of the severe diarrheal disease cholera. The bacterium has recently been causing outbreaks in Haiti with catastrophic effects. Numerous mutations have been reported in V. cholerae O1 strains associated with the Haitian outbreak. These mutations encompass among other the genes encoding virulence factors such as the pilin subunit of the toxin-co-regulated pilus (tcpA), cholera toxin B subunit (ctxB), repeat in toxins (rtxA), and other genes such as the quinolone resistance-determining region (QRDR) of gyrase A (gyrA), rstB of RS element along with the alteration in the number of repeat sequences at the promoter region of ctxAB. Given the numerous genetic changes in those Haitian isolates, we decided to investigate the possible origins of those variations in the Indian subcontinent. Thus, we determined the genetic traits among V. cholerae O1 strains in Delhi, India. A total of 175 strains isolated from cholera patients during 2004 to 2012 were analysed in the present study. Our results showed that all the tested strains carried Haitian type tcpA (tcpACIRS) and variant gyrA indicating their first appearance before 2004 in Delhi. The Haitian variant rtxA and ctxB7 were first detected in Delhi during 2004 and 2006, respectively. Interestingly, not a single strain with the combination of El Tor rtxA and ctxB7 was detected in this study. The Delhi strains carried four heptad repeats (TTTTGAT) in the CT promoter region whereas Haitian strains carried 5 such repeats. Delhi strains did not have any deletion mutations in the rstB like Haitian strains. Overall, our study demonstrates the sequential accumulation of Haitian-like genetic traits among V. cholerae O1 strains in Delhi at different time points prior to the Haitian cholera outbreak