Expanding on the Theory of Location, New Economic Geography, and Porter\u27s Theory of Clusters this dissertation attempts to identify key factors influencing the location of firms in a resource-based industry. The softwood lumber industry in the United States is used as a case study to test several hypotheses concerning these theories. Two U.S. regions, the West and the South, were selected for analysis because they account for over 70 percent of U.S lumber manufacturing capacity. A multi-disciplinary research approach involved three-stages. First, self-reported preferences were analyzed using common factor and conjoint analyses for preferences for location attributes. Surveys were sent to all sawmill managers in the U.S. West and South regions. Respondents were identified through the Random Lengths\u27 Big Book (2006), the industry\u27s most comprehensive database. Survey procedures followed Dillman\u27s (2000) Tailored Design Method. Conjoint analysis provided information on the relative importance of selected site attributes using several econometric models to estimate coefficients, significance and marginal effects of site attributes. Second, a model for industry location behavior in the U.S. South was developed using a spatial econometric model. An exploratory analysis identified deviations from complete spatial randomness as first-hand evidence of clustering. The presence of sawmill enterprises was used as the dependent variable, aggregated at the county level. Spatial autoregressive and correlated error econometric models were used to correct for spatial correlation. The final model was used to identify counties where softwood lumber industry development could occur in the future with a high probability of success. Third, two cross-sections of data were analyzed using point density tools to explore spatial concentration in the softwood lumber industry over time. There is evidence of consolidation in the industry as the number of firms has declined while capacity has increased over time. The findings are congruent with spatial predictions drawn by Location Theory, New Economic Geography and to some extent the Theory of Clusters. Research methods used in this study have the ability to capture decision-makers preferences and to operationalize major theories of location, economic geography and cluster development. Results can provide industry and economic development professionals with a new decision-making tool 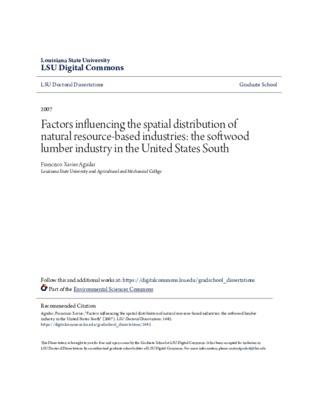