Physical activity and health-related quality of life among elementary students: an integrated perspective

School physical education (PE) not only offers and promotes health-related physical activity, but also encompasses the promotion and development of perceptions of mental health (USDHHS, 2010). It has been suggested that health-related quality of life (HRQOL) can predict future health, monitor children’s psychosocial health, and identify those most at risk or in need of support at an early stage. Assessing physical activity (PA) and health-related quality of life have become major issues in pediatric public health and also serve as a major goal of Health people 2020 (USDHHS, 2010). Research including assessment of theory-based mediators of health-related outcomes is needed (Ryan, Patrick, Deci, & Williams, 2008). Grounded in the expectancy-value (Eccles., 1983) and achievement goal (Ames, 1992a, 1992b) frameworks, the primary purpose of this study was to examine the relationships among the perceptions of motivational climate in PE, expectancy-value beliefs, intention to participate in PE, HRQOL, and PA among elementary children. A secondary purpose was to examine gender and racial differences in students’ motivation in physical education, intention, HRQOL and PA. Participants were 336 elementary school physical education students from three schools in the southeast US. They completed surveys and wore pedometers during three days of physical education classes. The findings support the assertion that children with higher expectancy beliefs were more likely to be physically active and report higher HRQOL than those with low levels of expectancy beliefs. Perception of a mastery motivational climate together with positive expectancy beliefs could be an advantage for physical and psychosocial health among children in this study, whereas perception of a performance motivational climate was associated with less physical activity (i.e. lower steps/min) during PE even if students view PE as important, interesting and useful. There were gender and race differences on children’s motivation, HRQOL and PA during PE, which suggests that interventions aimed at preventing physical inactivity and developing optimal mental health should be tailored to individual needs in light of those differences. This research may provide useful information on the translation of theory to practice designed to influence children’s health perceptions and behaviors 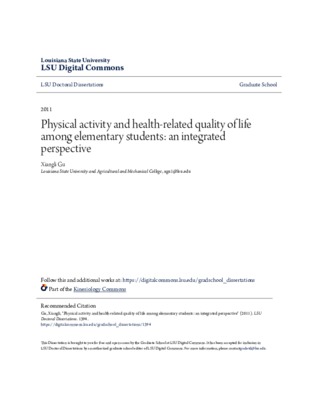