Dysarthria refers to a group of neurogenic speech disorders which result in abnormal strength, speed, range, steadiness, tone, or accuracy of movements required for speech production. Although speech deficits of dysarthria are heterogeneous according to lesion sites and/or etiologies such as stroke, traumatic brain injury, cerebral palsy, Parkinson’s disease (PD), “imprecise consonants” has been known as one of the most prominent and frequently occurring features of dysarthria, which subsequently contributes to decreased speech intelligibility. The present study points out the paucity of acoustic data on consonants produced by speakers with dysarthria, especially by spectral analysis, and reports four spectral moment analysis results on word initial stop consonants in six individuals with dysarthria and six age and gender matched healthy individuals. Each participant was asked to say a series of single words with a carrier phrase and a set of sentences. The initial 40ms of each single word was analyzed using TF32 to find the spectral moment values. Results suggest that the first spectral moment (M1) was the most useful in differentiating between the genders, healthy vs. dysarthria, and place of articulation, which is consistent with previous studies. This moment revealed that individuals with dysarthria have higher values compared to healthy individuals, which indicates that this speaker group tends to have a more anterior constriction for stop production. Along with this fronting pattern, the M1 ratios between adjacent stops were reduced for the speakers with dysarthria, which indicates reduced acoustic contrast for stop production. However, no correlation was found between the perceptual speech intelligibility estimates and the spectral characteristics 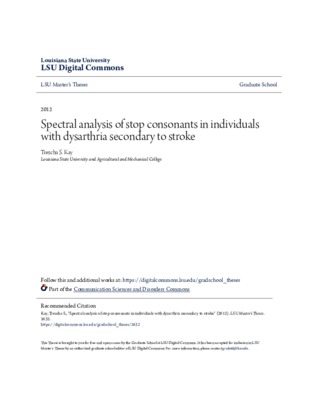