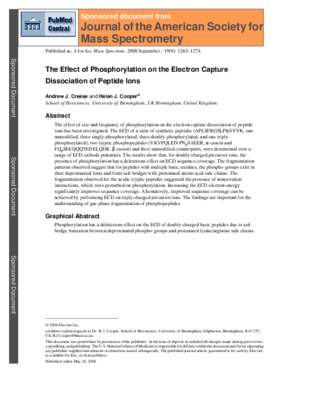 The effect of site and frequency of phosphorylation on the electron capture dissociation of peptide ions has been investigated. The ECD of a suite of synthetic peptides (APLSFRGSLPKSYVK; one unmodified, three singly-phosphorylated, three-doubly phosphorylated, and one triplyphosphorylated); two tryptic phosphopeptides (YKVPQLEIVPNpSAEER, α-casein and FQpSEEQQQTEDELQDK, β-casein) and their unmodified counterparts, were determined over a range of ECD cathode potentials. The results show that, for doubly-charged precursor ions, the presence of phosphorylation has a deleterious effect on ECD sequence coverage. The fragmentation patterns observed suggest that for peptides with multiple basic residues, the phospho-groups exist in their deprotonated form and form salt-bridges with protonated amino acid side chains. The fragmentation observed for the acidic tryptic peptides suggested the presence of noncovalent interactions, which were perturbed on phosphorylation. Increasing the ECD electron energy significantly improves sequence coverage. Alternatively, improved sequence coverage can be achieved by performing ECD on triply-charged precursor ions. The findings are important for the understanding of gas-phase fragmentation of phosphopeptides